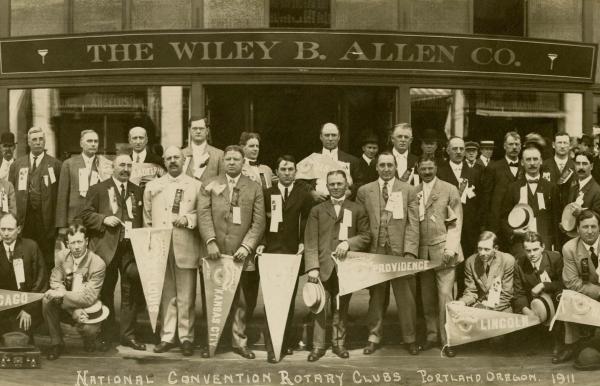 This action in 1987 allowed women to become Rotarians in any jurisdiction having similar “public accommodation” statutes. In October of 1987, the Rotary Club of Angels-Murphys D5220 inducted three women and in spite of threats to quit Rotary by some of the older male members – none did. Two of these three women went on to lead the A-M Rotary Club as president and one of those woemn has just completed over two years as charter president of the Angels Camp Centennial Rotary Club (a club which is very proud of its 50% female membership). That president has completed 19 years of perfect attendance.

The Rotary International constitutional change was made at the 1989 Council on Legislation, with a vote to eliminate the “male only” provision for all of Rotary. Since that time, women have become members and leaders of Rotary clubs and districts throughout the world.

The predominantly dependent status of women in western societies changed irrevocably during World War II as women filled occupations previously the domain of men when the men were called upon to serve in the armed forces. This change accelerated with the growth of the feminist movement in the 1960s and 1970s. Throughout the course of nearly seven decades of Rotary’s history has run the thread of the debate of women as members, yet the first constitution of the Chicago Club #1, adopted in January,1906, makes no reference to gender, referring only to “persons.”

In 1911 an all-women club existed in Minneapolis and between 1911 and 1917 an all-women Rotary club existed in Duluth, Minnesota alongside the men’s club. This club met on the 2nd and 4th Tuesday of the month, while the Duluth club #25 met on the 1st and last Thursday. In 1912, the board of directors of the Belfast, Northern Ireland club discussed the advisability of electing women to membership or allowing them to attend weekly luncheons. The club records of that period indicate the board considered it undesirable to elect women to membership or have them at the weekly luncheons. In that year, also, Ida Buell of the Duluth women’s club spoke to the 1912 Duluth Convention seeking support for women’s clubs. The Convention discussed the admission of women and rejected the idea. The RI Boards of 1914-15 and 1915-16 disapproved of Women’s Auxiliaries but the Board of 1916-17 held no objection to them being formed. In 1918 the Board refused recognition of them.

The 1921 Convention in Edinburgh, Scotland produced the Standard Club Constitution in which Article 2, Section III stated “A Rotary Club shall be comprised of men . . . “

Until 1989, the Constitution and Bylaws of Rotary International stated that Rotary club membership was for males only.

In 1978, the Rotary Club of Duarte, California, USA, invited three women to become members. The RI Board withdrew the charter of that club for violation of the RI constitution. The club brought suit against RI claiming a violation of a state civil rights law that prevents discrimination of any form in business establishments or public accommodations. The appeals court and the California Supreme Court supported the Duarte position that Rotary could not remove the club’s charter merely for inducting women into the club. The United States Supreme Court upheld the California court indicating that Rotary clubs do have a “business purpose” and are in some ways public-type organizations. 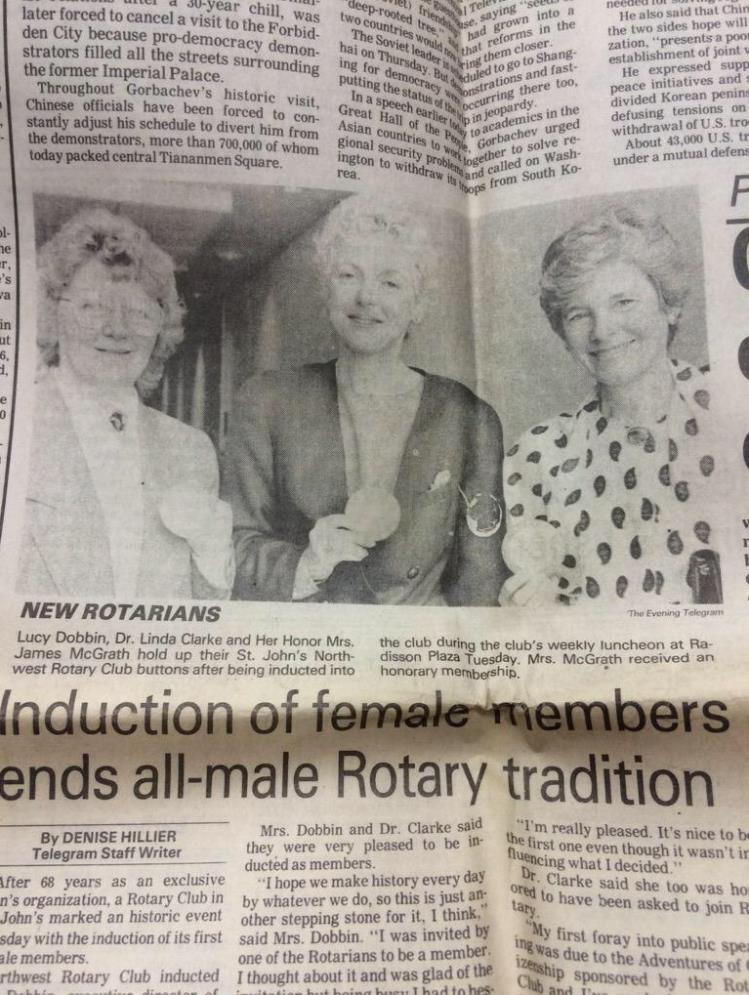 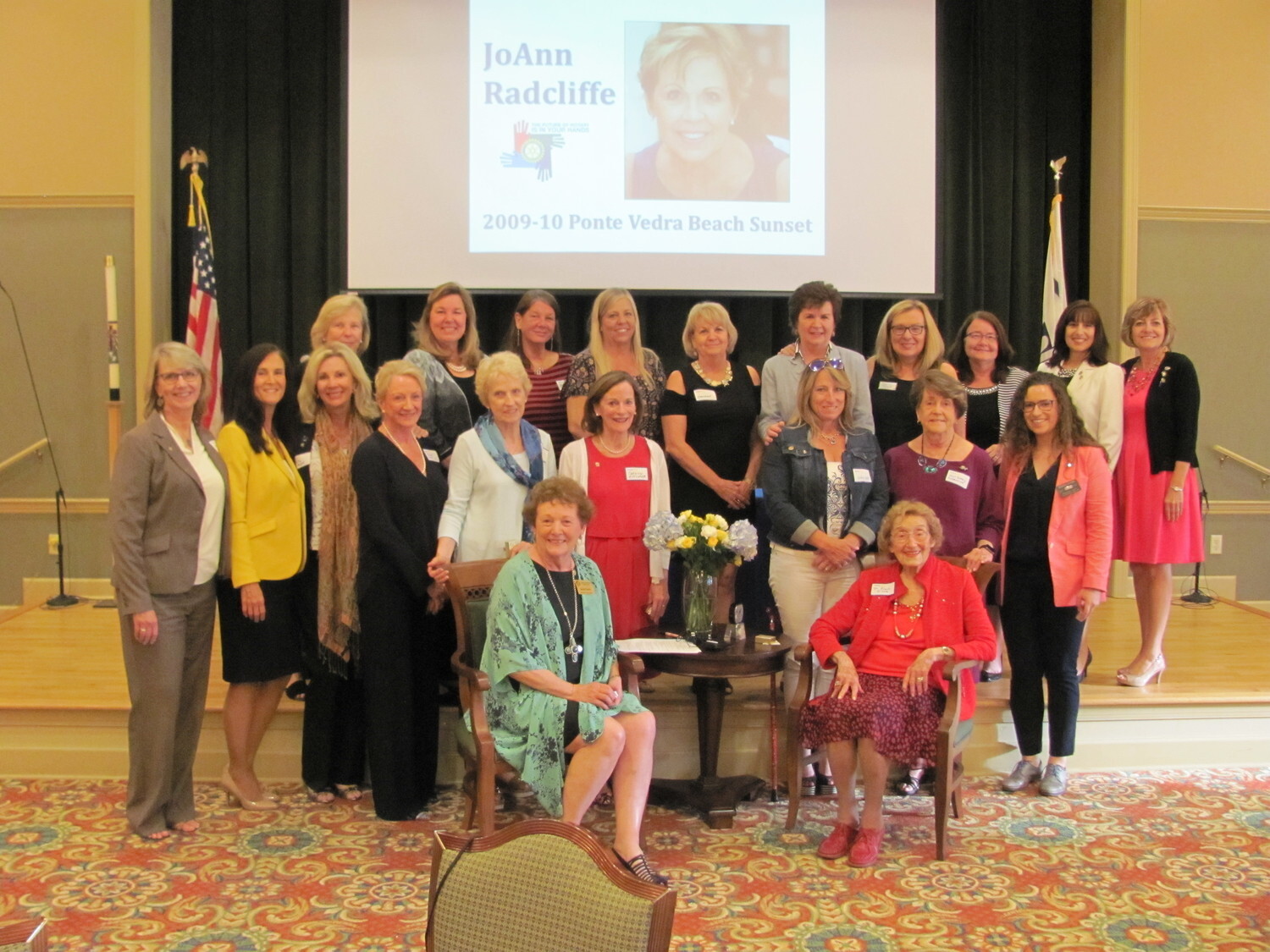 In May 1921, Alwilda F Harvey the wife of the Chicago Club president convened a luncheon meeting of 59 women who formed “Women of Rotary.” The Board of RI rejected that name so it was changed to “The Women of the Rotary Club of Chicago.” In England, on 15 May1923, the Manchester Club proposed “The Formation of a Ladies’ Rotary Club in Manchester.” The proposal was lost, but instead, the first Inner Wheel Club was formed with Mrs Margarette Golding as president. In 1940, Edwina Yearian Nicholls attended many meetings of the Salmon, Idaho club after taking control of her late husband’s Ford dealership, although she did not become a member. In 1950, at the Detroit Convention, the Ahmedabad Club of India proposed that the word “male” be dropped from Article III of the Standard Club Constitution. This was soundly defeated. Between 1964 and 1977 a number of unsuccessful attempts were made to provide for the admission of women.

However, the die was finally cast by a club in a small California town.

On the occasion of its 25th anniversary, the Duarte club admitted Mary Lou Elliott and Donna Bogart to membership on 1 June, 1977 and they were followed shortly afterwards by Rosemary Freitag. The reaction of the Board of RI was predictable: on 27 March 1978, Duarte’s charter was terminated. Duarte re-named itself the “Ex Rotary Club of Duarte” and in June, 1978 filed a suit in the California Superior Court against the RI Board decision. This was not heard by the court until 1983 when Judge Max Deutz ruled against Duarte, which in 1986 appealed that decision to the California Court of Appeal and the Deutz judgment was reversed. The RI Board appealed that decision to the California Supreme Court which refused to hear the case and the RI Board then appealed to the United States Supreme Court in 1986.

In 1984, District 5030 District Governor Carl E Swenson perceived the need of a new Rotary club in Seattle and appointed Lloyd Hara as his DG’s Representative to form the Rotary Club of Seattle International Districts. When the provisional club prepared and filed its Charter Application, it deleted references to “male” or “men” and the application was rejected by RI. The application was re-submitted including those terms and a charter was issued on 18 September, 1984, and Seattle ID took a resolution for the admission of women to the 1986 COL. This was soundly defeated. On 4 September, 1986 Seattle I D admitted 15 women members and on 17 September, General Secretary Philip H.Lindsey wrote a strong letter to the club informing it that it could not admit women and continuing to do so would result in its charter being withdrawn. In January 1987, Seattle I D then filed an amicus brief with the United States Supreme Court in support of the Duarte club, and in that year the Oakland club #3 wrote to the General Secretary of RI questioning the termination of Duarte’s charter.

On 30 March, 1987, the US Supreme Court heard an appeal by the Board of RI against the California Court of Appeal decision and on 4 May handed down a 7-0 unanimous decision affirming the California Court of Appeal decision, ruling that Duarte could not discriminate against members because of gender. Duarte had the final say in the matter when on 23 June, 1987 Dr Sylvia Whitlock was inducted by DGE Dr Kim K Siu as the first woman Club president in the history of Rotary. In January 1989, the Council on Legislation voted to change the Constitution and By-laws to permit the admission of women into Rotary and on 1 July1995 Mimi Altman of the Deerfield, Illinois club became the first woman District Governor of District 6440, followed by Gilda Chirafisi (District 7230), Janet Holland (District 5790), Riba I Lovrein (District 5220), Virginia B Nordby (District 6380), Donna J Rapp (District 6310), Ann Robertson (District 6710) and Olive P Scott (District 7190).